We want your Open House feedback!

We have created a feedback form to consolidated input about open house experiences. Having all of this data in one place will help us find inconsistencies in the answers people were given by Kinder Morgan, and help prepare for scoping hearings.

Thanks for any feedback you provide — whether you found something you heard surprising, troubling, or dubious. – Katy Eiseman & Cathy Kristofferson for the StopNED Coalition Landowner Outreach Team 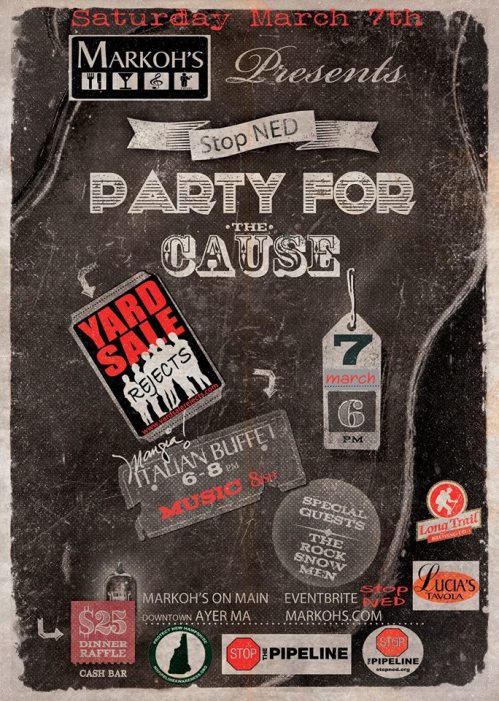 Two floors of Entertainment are going to Rock!

Tickets online Eventbrite https://stopnedparty.eventbrite.com/
Pay at the door Reserve online through OpenTable @ www.Markohs.com or you can call Markoh’s on Main​ to reserve your spot. Please reserve, space is limited. 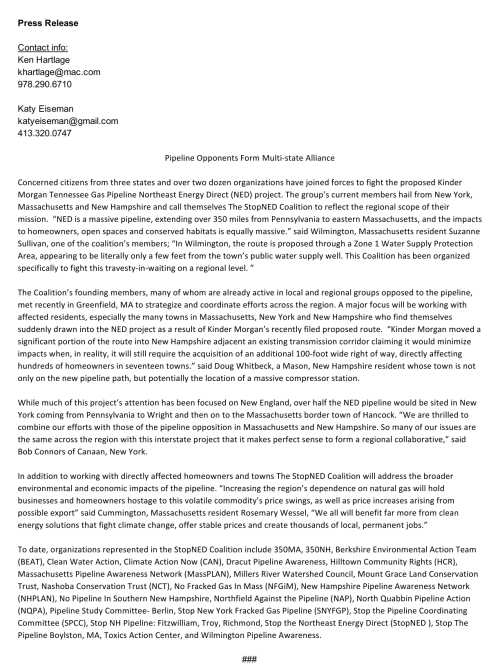 Join us at the Kinder Morgan Open Houses!

Our comments on the Low Demand Study modelling results

Our thoughts after reviewing the modeling results given at the Dept. Of Energy Resources (DOER) Low Demand Scenario Study’s Third Stakeholder meeting held 12/18/2014

View this document on Scribd

Comments from others in our coalition are here.

Self-Determination is a Public Necessity

Adapted from comments submitted on November 21, 2014 to the Federal Energy Commission for MassPLAN.

Since May of this year, 41 New England municipalities have passed resolutions opposing Kinder Morgan’s Northeast Energy Direct project (NED) and other new interstate gas pipelines.[1] Thirteen of these municipalities are not along the originally proposed NED route, but all are acting with a unity of purpose.  Many of these resolutions passed with unanimous or near-unanimous votes at town meetings, voted on by the community.  The direct democratic tradition of New England town meeting is alive and well, and this self-determination persists as part of the way of life and community identity in our region.

Thousands of people living in the vicinity of multiple proposed routes face being asked to sacrifice their property, safety, and rural way of life, for a purported greater good – a “public necessity.”

What, precisely, is the greater good?

The possibility, but not the promise, of cheap gas?  Most signs point to the majority of the gas through this pipeline being exported as LNG.  The US EIA has recently concluded, “Increased LNG exports lead to increased natural gas prices.”[2]  To the extent that any of this gas would be available for domestic electrical generators, it should be noted that the shift in New England towards heavy reliance on natural gas for our electrical generation has already made electric ratepayers beholden to the whims of the natural gas commodities market.[3]

Is the greater good “keeping the lights on?”  Market reforms, demand-side solutions, and serious investments in renewables and renewable storage can keep the lights on without razing swaths through treasured New England landscapes, deforesting hundreds of acres, and resorting to massive eminent domain takings.  If we are not ready to march across the bridge to a sustainable energy infrastructure today, there are less invasive fossil fuel “bridges” for the short term:  increasing LNG storage to deal with peak demand periods would not require the investment in new infrastructure (the costs of which would be passed on to the ratepayers); nor would keeping open a few of the oil plants that ISO New England deems “at-risk of retirement,” to be used only during times of peak demand.[4]

Is the greater good “switching to cleaner energy sources”?  A pipeline that sends 2 billion cubic-feet of gas per day out of the Marcellus shale, to be burned somewhere or leak along the way, would further regional environmental destruction and climate change.[5]  Preventing this pipeline, even if it means burning a bit more oil for a few more years, would be more likely to allow a timely transition to renewables.  The studies keep pouring in concluding that (1) natural gas is not better than other fossil fuels from a climate-change perspective, and (2) accessibility to natural gas is impeding our transition to renewables.  If natural gas has served as a bridge, at this point it’s a raised drawbridge.  That said, Deutsche Bank recently predicted that solar energy will nonetheless achieve grid parity by 2016 across the U.S.[6]  Storage technology for renewables is viable and constantly improving.[7]

Forty-one forward-thinking communities recognize that Kinder Morgan’s pipeline expansion proposal is a sales pitch for infrastructure that would be a huge step backwards.  This pipeline is likely to be obsolete before it is built.

Thanks to all who organized, participated, and the hundreds who attended! We had everything from maps of the entire proposed route of NED, its laterals, even its rumored alternatives… the “It’s Personal Photo Display”… booths from environmental groups and sustainable energy providers…

Anne Marie Garti – How To Particiapte in the FERC Process: Developing a Collective Strategy

Quilt Fundraiser
The drawing date for the quilt is December 18th. The quilt is presently on display at Lucia’s Tavola at 31 Main St in Ayer where tickets can be purchased.

Here’s the agenda for tomorrow’s (11/15) Summit in Fitchburg!

Please RSVP here to speed up entry into the event. Over 300 now registered!

The groans were audible for miles around.  Kinder Morgan had just filed its Northeast Energy Direct (NED) resource report with potential alternate routes listed, and the news was spreading like wildfire.  Never mind that none of these routes are approved – the mere mention of that possibility has sent citizens in both MA and NH into frenzy.

Suddenly MA towns such as Cummington, Chelmsford and Westford are in the line of fire, as are businesses along Rte. 119.  NH hit the double jackpot with a brand new spur option through Brookline plus a possible major pipeline stretching from Winchester to Pelham.  Unfortunate for Western Mass., they draw the short straw no matter what route is selected.

With thousands more residents across MA and NH now affected by one of the potential new routes Kinder Morgan is no doubt sitting back waiting for the NIMBY apocalypse to unfold. They are counting on us to battle each other for the ultimate prize – to keep the pipeline out of our respective towns and off our conservation lands. Meanwhile, Kinder Morgan can bide their time, banking on one greenfield route or another emerging as FERC’s choice. 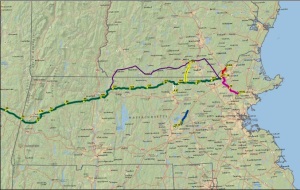 Fortunately most informed people are wise to these tactics, and know there is only one winner in this game of charades:  Kinder Morgan.  Anything short of defeating the pipeline means we all will pay the price of accelerated climate change, a spoiled environment and, if any gas is exported, the probability of higher – not lower – prices.

Divide and conquer is the oldest strategy in the book. Don’t fall for it.  Strength in numbers is our strongest weapon.  It’s helped us postpone the pipeline tariff and secure the Administration’s commitment to study our energy needs.  And now the Open Houses have been postponed further delaying the process. Let’s work together to add one more “win” to the list – putting an end to this pipeline forever.

Full Display of Maps of KM Pipeline Route: With the extraordinary work of several individuals, we now have maps of the full route across all 44 towns. These will be posted at the Summit, so residents, legislators, and organizations can see first hand the latest information.

New Short Documentary Video: “You don’t hear much about this….a story about what it means to have a natural gas compressor station as your neighbor”, Stephen Wicks, a well known photographer, filmmaker, and educator will show his latest work on compressor stations at the Summit.

What’s Next ?: This post conference conversation, from 1:30-2:30, will provide interested attendees an opportunity to coalesce around specific interests and network with others.

Refreshments: Monty Tech Spanish teacher and 9 of her students will be providing coffee and refreshments for the conference. The proceeds will help to fund their special homestay/service trip to Peru in summer of 2015 –the first in the school’s history!

Get your FREE tickets here: http://statewidesummit.eventbrite.com 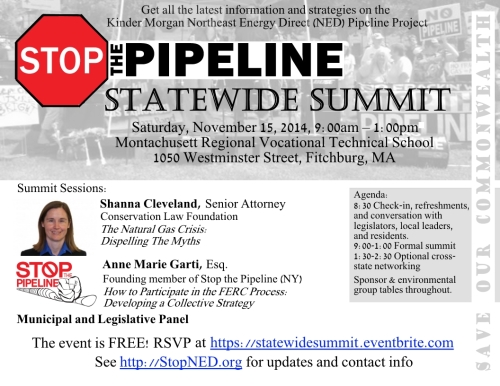